Osaka, Japan, 19th September 2019: The beautiful City of Osaka will play host to the World's very best Stand Up Paddle Athletes this weekend, as the Osaka SUP Open presented by Remax will take center stage on Saturday 21st and Sunday 22nd September for a weekend of action, entertainment and participation for all.

It all kicks off with an exclusive trip down the famous Dotombori Canal tomorrow night, followed by a full day of short course fun and competition on Saturday at the event site on Nakonoshima Island, right at the heart of Osaka. Here are the events that will take place on Saturday:

Racing: day 1 (all times are on Japan time)

In addition to the Racing, there will be a full day of activity in the APP Pool, from SUP Yoga sessions, to youth clinics and lifesaving programs, as well as a chance to try the exhibiting brands latest gear.

Finally, there will be music and entertainment on the center stage through the day by renowned musicians and a Hawaiian Hula Halau celebrating the Hawaiian origins of the sport of SUP here in Osaka.

Join us on site here in Osaka or online at www.appworldtour.com and @appworldtour and check out the trailer for this weekend's event by CLICKING HERE

Day 2 will kick off bright and early here in Osaka with the Around the Island Race that will see Amateur, Pro-Am and Pro Racers come together for the signature race of the weekend around the stunning Nakanoshima Island.

From the 7km Amateur course to the 10km Pro-Am and Pro Course, the Osaka SUP Open presented by Remax will see a record amount of SUP enthusiasts take to the water for a celebration of the sport and culture here in this unique Japanese City.

The APP World Tour will be delivering a full broadcast of the Pro Racing from 12pm Japan time on Sunday September 22nd (5pm Hawaii time / 8pm PST /11pm EST on September 21st and 5am CET on September 22nd), so make sure to tune in to watch it all go down, or check back later in the day to watch the replay and check out the highlights at appworldtour.com and @appworldtour

Outside of the main race, there will be youth racing, team racing and entry level courses for all ages and abilities, coupled with a full program of activities in the APP Pool, a United Sports Foundation special event and Live Music and entertainment throughout the day, culminating with a Hula performance and Official Awards to wrap what promises to be an incredible weekend here in Osaka.

Stay tuned and watch it all go down LIVE at www.appworldtour.com and @appworldtour

Who to watch out for in the stacked Men's field for the Osaka SUP Open, presented by Remax Japan

With images of the iconic Race Around the Statue of Liberty still fresh in our minds and the dramatic Sprint Racing through the surf of Ocean Beach, so too is the return to form of the current World Champion, now regaining the ratings lead after a spectacular performance in New York: Arthur Arutkin from France.

However, right behind him is the ever dangerous and increasingly powerful Michael Booth from Australia, who paid the price for a small slip up in the distance race, costing him the ratings lead, but with a second place, keeping him within 500 pts of Arthur and the #1 spot.

Behind the top two is a wealth of talent and at this midway point of the APP World Tour Racing season, we are bound to see some bold moves up the leaderboard from a number of the World's most likely contenders: Martin Vitry is on a high after a phenomenal, breakout performance in New York, while Casper's sprint prowess and consistency has proved enough to keep him in the Overall mix so far.

Noic Garioud had a disappointing finish in New York after his groundbreaking opening event of the season in London, now sitting in 3rd place overall and looking to make back up some ground against his competition here in Osaka.

Meanwhile, fellow countryman Titouan Puyo of New Caledonia, who was one of the on form competitors in London will definitely be one to watch out for as will the multiple times World Champion, Connor Baxter from Hawaii.

The list goes on, from the Hasulyo brothers, Lincoln Dews and the Peruvian, Itzel Delgado, to the Tahitian contingent of young blood Enzo Bennett and legend Georges Cronstadt and not forgetting the local standout Kenny Kaneko and local Wildcards looking to create havoc in the international field.

One thing is for sure, it will be a showdown to remember here at Stop #3 of the APP World Tour in Osaka, so join us for all the action LIVE on both Saturday and Sunday at www.appworldtour.comand @appworldtour and stay engaged across social media @appworldtour #osakasupopen

The depth of Women's talent on the APP World Tour in 2019 is staggering, as we watch the performance bar raise event by event 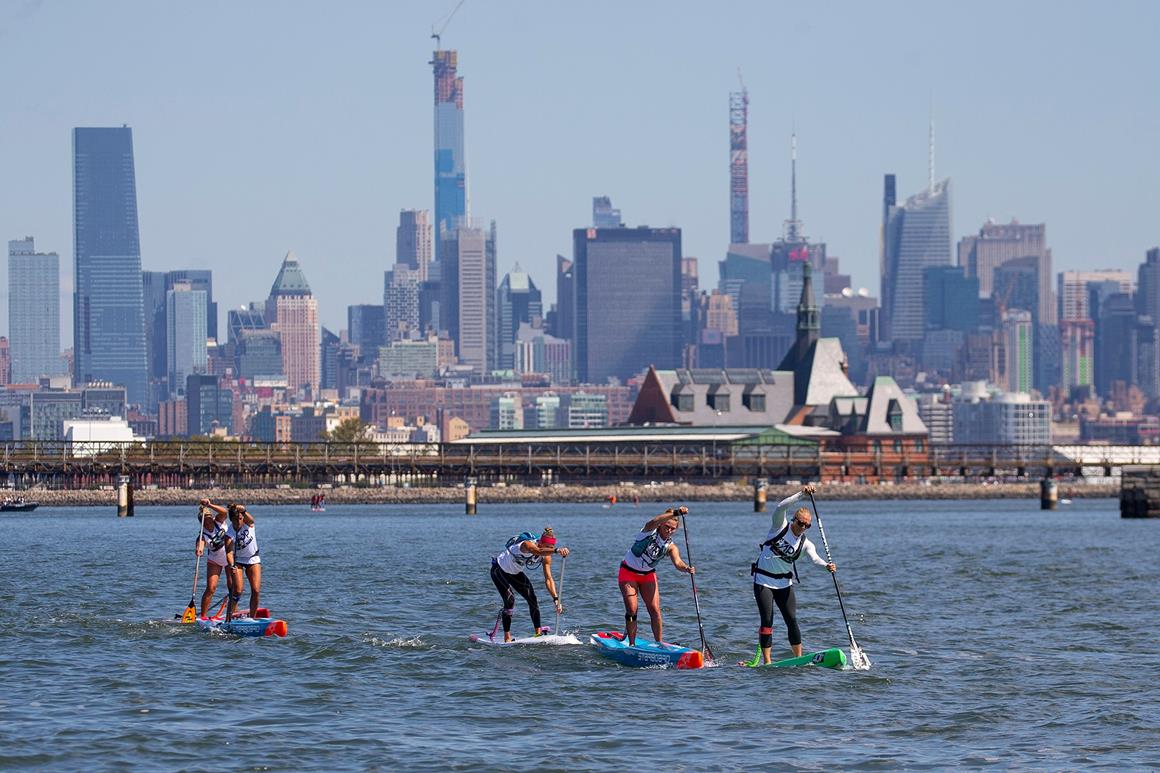 The dramatic skyline of New York City from earlier this month has been replaced by the equally beautiful City backdrop of Osaka this weekend, as the APP World Tour's Women step up to do battle in one of the athletes' favorite regions on Tour, Japan.

It has been an amazing year so far for the Women of the APP World Tour this season, as new Title Contenders have stepped up to be counted, and competition has been fiercer than ever.

Seychelle Webster from the USA came out of the gates strong in London, followed by another impressive performance in New York, where a win in the sprints and strong finish in the Distance race keeps her on top of the leaderboard coming into Stop #3.

However, right on her heels is the ever impressive April Zilg, also from the US, who finished on a high in New York with a dramatic win in the Race around the Statue of Liberty and the overall win at Stop #2 of the 2019 APP World Tour.

A name to watch out for here in Japan in particular, is Fiona Wylde: with a strong track record of competing in this region and a real affinity and love for the country, Fiona's strong finish in New York coupled with the confidence coming from her World Title in 2016 make her a real favorite coming into stop #3.

However she is not alone, as the young talent Annie Reckert, 2014 World Champion Lina Augaitis and of course Japan's great hope and current World #5, Yuka Sato will all be serious threats at the Osaka SUP Open presented by Remax Japan.

Who will come out on top? All will be revealed this weekend, so make sure to join us LIVE for all the action at appworldtour.com and @appworldtour

Fiona Wylde and Diabetes: From Type 1 to Number 1